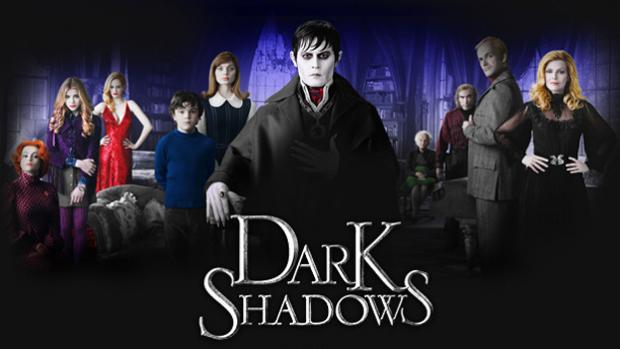 Some of you out there may not know this but Tim Burton's film "Dark Shadows" is based off of the popular daytime soap opera. With Vampires, Witches, Warlocks, Werewolves, and other supernatural creatures, it was the phenomenon that ran on ABC-TV from 1966-1971.
With two Dark Shadow films, multiple tries at re-vamping (pun intended) the series, a score of fans and even a Dark Shadows Festival, the show's legend has lived on in various forms. I, myself, am an old fan of the soap opera and watched the re-runs on the Sci-Fi Channel in junior high. When I heard that Tim Burton was remaking "Dark Shadows" with Johnny Depp as Barnabas Collins, I was out of my mind with ecstasy. Burton and Depp are the perfect pair to tackle this project, and I knew they would do it justice. I have to admit if I had millions of dollars I might have done a "Dark Shadows" movie myself.
The show started with Victoria Winters, the outsider who comes to Collinwood, to be the new governess. She soon finds out that the Collins family has more than just skeletons in its closet. In the soap opera Barnabas Collins wasn't introduced to the cast until nine months into the show, becoming the first Vampire with a conscious in pop-culture history. However, in Burton's film version the story begins with Barnabas Collin's mortal life before he was cursed by Angelique Bouchard (Eva Green)--his jilted Witch lover--and transformed into a Vampire and entombed for two centuries. We jump a head in time to 1972 with Governess Victoria Winters, played by Bella Heathcote, on her way to Collinsport Maine. When she arrives at the old gothic-style Collinwood mansion she meets the Collins played by an all-star cast.
Michelle Pfeiffer plays her employer, and head of the Collins family, Elizabeth Collins Stoddard. The family's live-in-shrink, Dr. Julia Hoffman, is played by the very talented and always awesome Helena Bonham-Carter. The brother, Roger Collins, a drunken widower and negligent father, is played by Jonny Lee Miller (who was once married to Angelina Jolie just so you know). The Collins children are played by Chloë Grace Moretz (also seen in "Kick-Ass" and "Hugo") and Gulliver McGrath (also seen in "Hugo" and "Lincoln"). The family has plenty of personality all their own, but things get even stranger at Collinwood when Barnabas Collins is accidently released from his coffin. He returns to his home to find that Collinsport has changed considerably.
His family's fishing company is all but extinct and his family manor in shambles. Luckily, he has a hidden stash of wealth in the mansion and goes about trying to reconnect with his family and return the family business to its former glory. Only problem is his wicked Witch of an old flame is still alive and owns the rival fishing company and pretty much owns the town. What ensues is a hilarious farce of dark magic, Vampires, and 1970's culture. There's even a part where Barnabas kills a bunch of hippies (awesome)! I loved this movie and laughed out loud all the way through. However, they never explain exactly how Angelique Bouchard managed to live two hundred years. The film likewise does not explain where the modern day Collins descendants came from. In the beginning of the film, they portray Barnabas Collins as an only child; his parents both killed by one of the Witches' curses before he became a Vampire. These two plot holes bugged me a little but not enough to take away from my enjoyment of the film. I would recommend this movie to anyone who likes Tim Burton, Jonny Depp, supernatural beings, and has a dark sense of humor. You don't have to be an original "Dark Shadows" groupie to love the movie, but it doesn't hurt.
Below is a link to the movie trailer and a dark shadows fan site for you to check out as well. Now go forth, children of the night, and view this flick. Love it or hate it, I'd love to hear what you thought of it.

Till next time,
R.J. Craddock


http://www.collinwood.net/info/
Posted by Unknown at 7:07 PM