I have to start this review by asking a question: "What would've happened had the 'Mortal Instruments' come before 'The Twilight Saga'?" Well, let's start with the books and then move on to the movies, shall we? To answer this question (spoiler alert) if you're a "Twihard" you might not want to read this post, your bible of teenage romantic fantasy is about to get trashed!

"Twilight" written by: Stephanie Meyers, published October 5th 2005: I only read the first book because my sister wouldn't stop going on and on about it and she let me read her copy. What did I think of the book? It was badly written with some good characters, not including the lead lady Bella, who lacked personality, gumption and any real appeal. Despite this somehow Edward, one of the more interesting characters, still found her irresistible. The only thing remarkable that Stephanie Meyers did was write a story where an exceptional man falls in love with a non- consequential woman. The kind of thing that only happens in a cheesy romance. Also, she watered down Vampires till they were barely recognizable of their Dracula ancestry so she could sell them to a YA audience which isn't remarkable in the least. Not to mention that Meyers can't write an ending to save her life. Every single one of the books ended with an anti-climax. That's bad writing, people, not worthy of world-wide aclaime.

Mortal Instruments, "City of Bones" written by: Cassandra Clare, published March 27th 2007: I wish I had read this book a long time ago. Why? Because it's unbelievably good! Cassandra Clare is an exceptional writer. She develops three dimensional characters, all with their own strengths and weaknesses. Builds worlds of fantasy that are so detailed and rich they seem almost real. Also, she can write a great plot, and a fantastic ending! Obviously I loved this book. Grant it, I was a little angry with the author for how she ended book one, but not enough not to keep reading the series. I loved Clary Fray who was realistic and worth cheering for. Also, I found her relationship with the two male love interests believable, and her allure wasn't written or forced  but deserved. Honestly, I couldn't say more good things about this book and its author!

Twilight: bad, bad, bad. I remember seeing a preview for "Twilight" before it came out and it looked like a really lame music video from the 80's. Sadly when I actually watched the movie it wasn't much better than the preview. Bella who was terrible in print was even worse on film because of the stale performance of Kristen Stewart. Not to mention that the script was cheesy and the plot paper thin to begin with. Robert Patterson's not bad, but even he had some awful moments in the film. I've enjoyed him in other movies since, so I'm glad this catapulted his career and all, but his portrayal of Edward was stiff in the first movie and only got slightly better throughout the series (books and movies). This movie tried too hard to be hip and just comes off as comical. Bad, very bad! 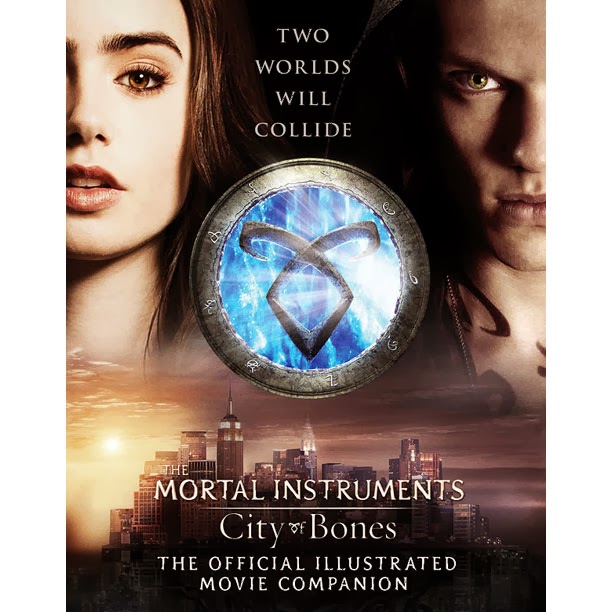 City of Bones: I had just started reading this book when I heard they were making it into a movie. I was really excited for this film. Naturally I was really sad to hear it was getting such bad reviews when it finally came out. Then I saw the movie last night. Yes, the first half of the movie is a little slow, despite the script's aggressive attempt to condense a complex plot and making it work for a film. The second half, however, was very entertaining. They did some very clever things with the book, and adapted it into something of their own. So even if you've read the book, the ending will pleasantly surprise you. The actors were all fantastic. I'll admit I had my doubts about Jamie Campbell Bower who portrayed "Jace Wayland" but by the end of the film I was sold on him. I thought he and Lilly Collins (Clary Fray) had great on-screen chemistry. Simon, Clary's best friend, was just as good in the movie as he was in the books. I came out of the movie wondering what on earth all those critics were thinking. I thought it was terrific. A great adaptation of a fantastic book! 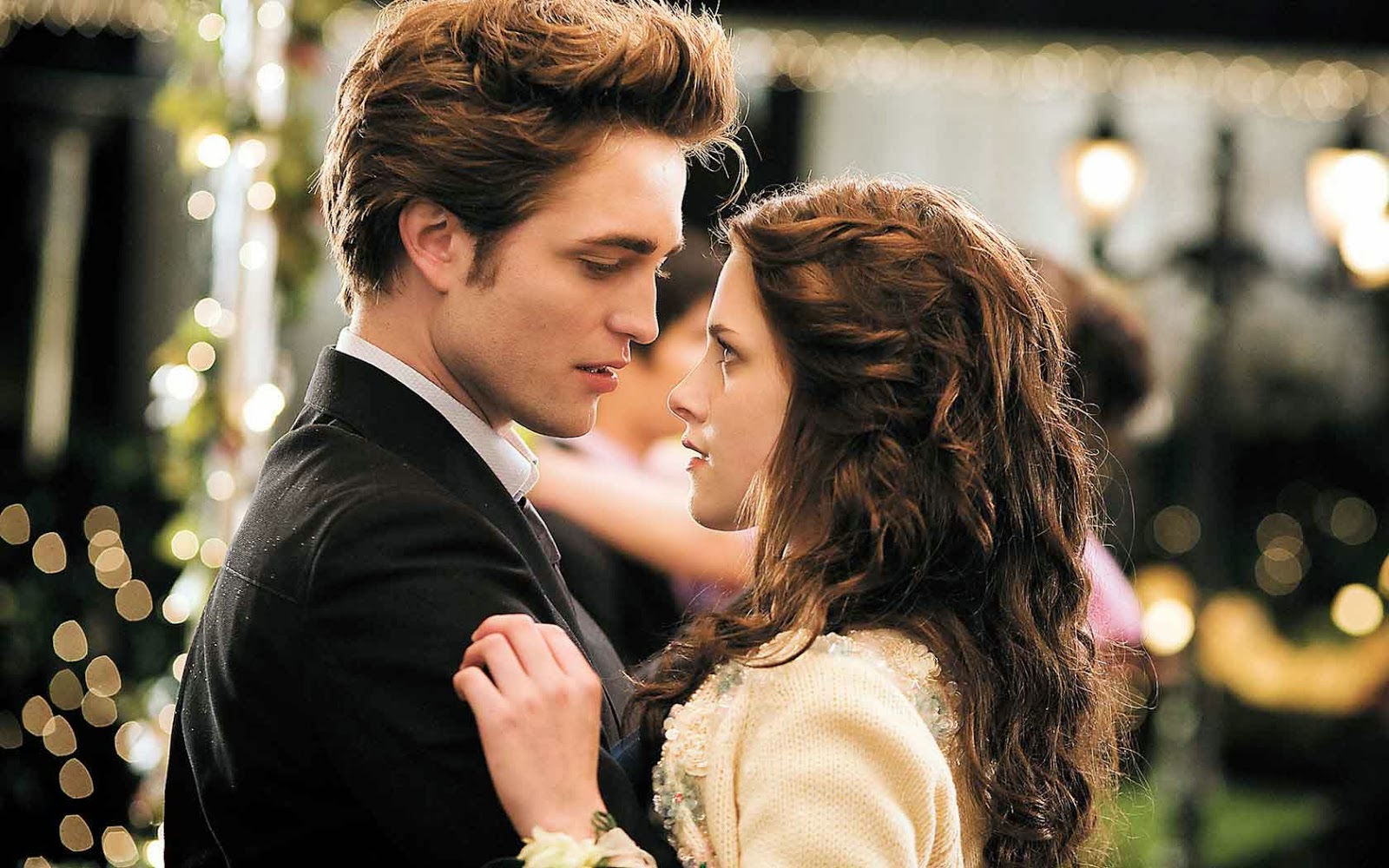 So now that I've shared my thoughts on the books and the movies, let's answer that question now. "What would've happened had 'Mortal Instruments' come before 'Twilight'?" The world of Urban Fantasy as we know it would be a better place! Vampires wouldn't have become watered down, poorly-written characters like Bella who fall in love with a guy whose basically a stalker, wouldn't be idealized by teenage girls everywhere (honestly what message is that sending to young girls?). None of the terrible "Twilight" fan fiction would be out there to plague the world such as "Fifty Shades of Grey". Instead, young girls would be idealizing Clary, a strong, independent, clever, and sweet teenage heroine who fights for a greater cause and doesn't just fall all over the first guy to show up in her bedroom in the middle of the night. 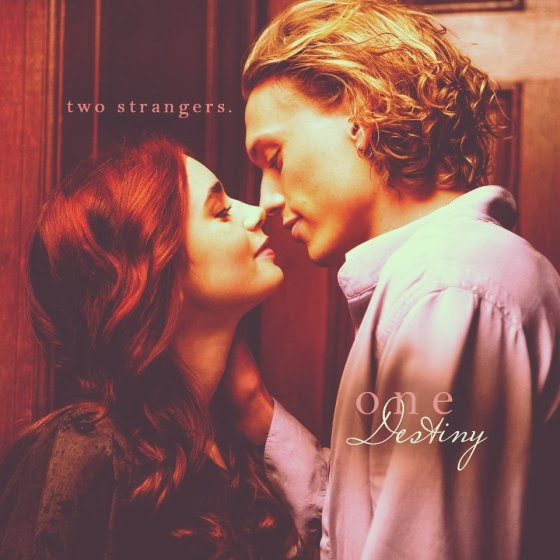 In conclusion: "Twilight" didn't invent the Vampire, it didn't invent star-crossed lovers. I'm saying that just because "Twilight" came first doesn't mean it's superior, in fact, it isn't. Cassandra Clare is an original and she borrowed nothing from Stephanie Meyers. "City of Bones" stands on its own and needs not be compared to "Twilight" or any other.  I'm saying that everyone ought to give the movie "City of Bones" a chance. Forget what the critics say. If you loved the books chances are you'll enjoy the movie. But hey, don't take my word for it. Go forth, read the books and see the movies, make up your own mind and share your thoughts here with us.

Some say that Vampires and magic has all been over done. For the die hard Fantasy/Paranormal enthusiast the genre never dies or gets old, it just takes on new shapes and new faces. Until next time...

R.J. Craddock
Posted by Unknown at 9:26 PM No comments: 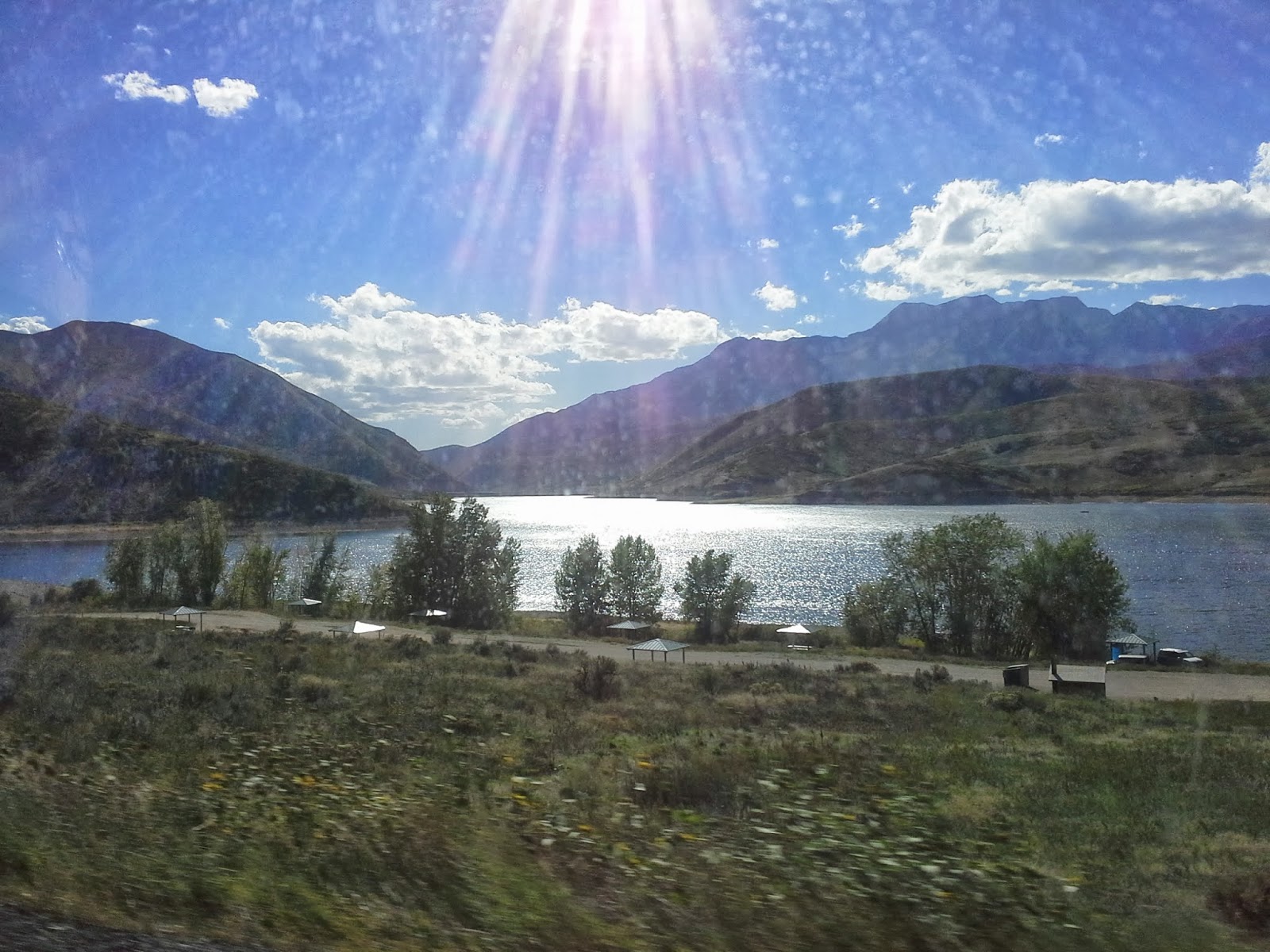 I just got back from another successful Writer's Retreat. One of the members of my critique group has a fancy-schmancy cabin in her family that she's been so kind to share with us. There's something about being in a cabin up in the mountains away from your everyday life that seems to spark creativity and open the mind to new possibilities. The last Writer's Retreat was in June. During that weekend I finished writing book two "The Offspring". This time around I started my first draft of book three "The Coven".

I got the prologue and the first two chapters of the book written, as well as a book outline done. I was there with three other talented ladies, Adrienne Monson, Rebecca Rode, and Karren Pellette. When we weren't writing, we talked about writing, went for walks to the lake, watched a movie, and played "Just Dance 3" on the Wii. I know it sounds like we just goofed off, but that's far from the truth. Each one of us got at least one of our writing goals accomplished this weekend. We started talking about outline writing verses discovery writing.

When I really thought about it, I realized that I am a little bit of column A and column B. No, I don't really outline my books, I daydream them. I live them out in my head till I know them backward and forward. Then I sit down and write them. So if ever I couldn't finish my series for any reason, there'd be no way for another to come along and finish it for me. I don't keep enough physical notes for anyone to even know where to start. When I do start writing though, new things always come to light as I try to translate my mental vision into words. So, in that way, I am a discovery writer. But I know details about the plot, and how every book will intertwine in ways that most discovery authors can't even fathom. Yet, I write in a way that is unlimited, organic, and creative in a style that most outline, rule-driven authors couldn't imitate. It's fascinating to talk to other authors and hear about their writing process. What works and what doesn't work for them and where they get their inspiration. Most of all, I love how unique and different we all are. No two people are alike and that is most diffidently true of authors, too.

Anyhow, I'd love to hear about all your writing process. Feel free to share. Now go forth, write, create, or just read and celebrate the written word.

I have to apologize for completely spacing last weekend and not writing my blog. Sorry, patient readers. Let me try and make it up to you. A lot is going on right now in regards to the "The Children of Cain" series. Book two, "The Offspring", is complete and awaiting first edits. I'm almost done with all the interior illustrations, and am halfway done with the cover/art design. Next weekend I'm off to another writers' retreat to start the first draft of book three, "The Coven". To celebrate the completion of book two I painted my desk navy blue! It was looking run down and I'm not a fan of the brown or wood grain. Here are some pictures of the finished product: 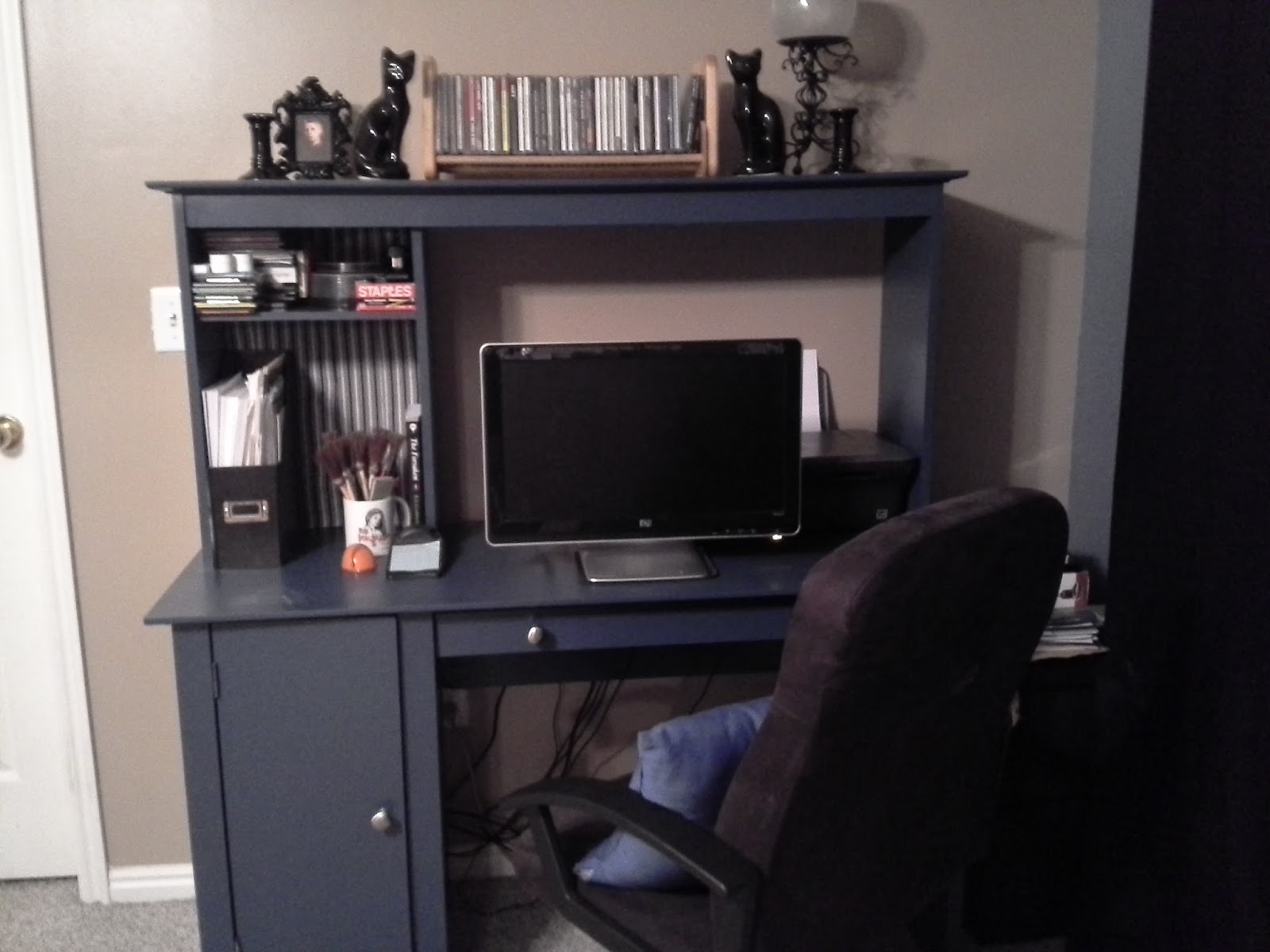 I'm hoping the new sophisticated look of my desk will help inspire me and I'll get book three written in no time.

In other news I was recently contacted by a publisher who was interested in reading my manuscript. Apparently they found my name and my book listed in the library of congress. I looked up this company and found out this is how they get their leads for suckers. They're one of those vanity presses that charges through the roof to publish your book. I say no thank you. I have done everything they can do for my book. The only thing I can't do is advertise the heck out of it. I just don't have the cash for that, but I'm working hard to get the word out about my book, and I'm doing just fine on my own. I love getting to draw all my illustrations and designing my own covers. Self publishing has been a very rewarding experience for me. I love it!

Anyhow, I'm off to work on "The Offspring". I know you're all dying to read it, so while you wait for it's release you can enjoy one of the illustrations. 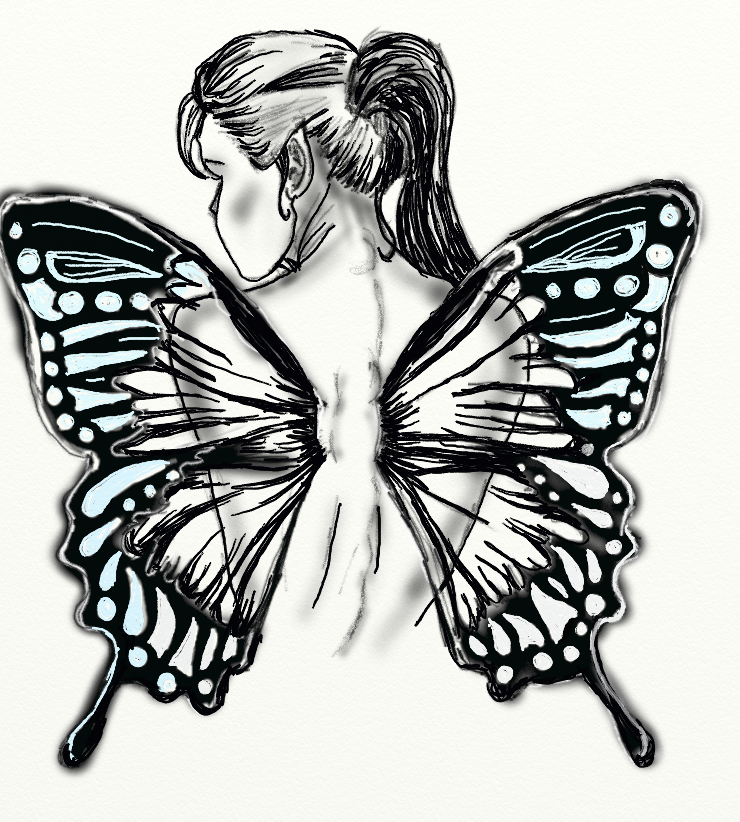 Now go forth read, laugh, cry and enjoy life and all it's little wonders!

R.J. Craddock
Posted by Unknown at 2:40 PM No comments: