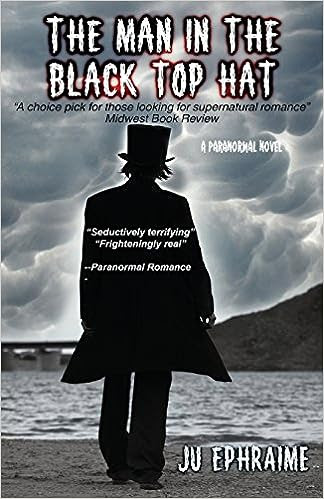 Once again it seems as though I've fallen off the face of the earth or at least the internet world. But, alas, gentle readers, I am still living; just overwhelmed and having perhaps the craziest summer of my life. Anyhow, I return to you today with a book review! "And the villagers rejoiced! Yea!" The book? The Man in the Black Top Hat by Ju Ephraime.


Synopsis: Syria Warrington came home one afternoon and found an old black top hat on her front step, being a lover of all things old; she did not hesitate to take it into her home. But bringing this top hat into her home unknowingly exposed her to the spirit that called this hat home. The strange happenings that began to take place in her home from that day on had Syria questioning her sanity. Her life, as she knew it, began to quickly unravel before her very eyes as night after night she found herself in the arms of a stranger. Were her experiences real or imagined?


The Pros: I love the premise of this book, but then I grew up in a haunted house and was the center of that paranormal activity so maybe I'm bias. However, I love the physiological aspect of having a ghost stalker. You can't see them. You can't stop them. You can't really get a restraining order or call the cops. Heck, you can't even really tell anyone about it without everyone thinking you're crazy! That would drive anyone mad! Plus, the added sense that you're no longer safe in your own home and the fear that this entity will do harm to your family just adds to the tension the main character is under. Not to mention can you imagine being afraid to go to sleep for fear of what this invisible stalker will do to you? I relate to Syria's love of old things, and this helped me connect with her. I have always enjoyed things from other eras more than my own. However, I buy old furniture and pieces and make them over, I even paint them! This, Syria would never approve of. What's funny is I just barely bought a 1940's telephone from a flea market for decor in my kitchen. I got it for a steal, too, and then I went and read this book and now I'm worried that I may have made the same mistake Syria did! (Spoiler) Hmmm, I'll have to keep an eye on that phone, I'm not tossing it into a barbecue anytime soon but if it starts moving about the house, or I start having crazy sex dreams about some random World War II solider then it's out of here!


The Cons: This book is written in a style that resembles a memoir more than a traditional novel, meaning that the majority of the book is summarized. Instead of unfolding as if you were apart of the story, you feel like an outsider reading an account from someone's journal. This is acceptable from time to time in a book when events need to move along, but as a whole book it undermined the tension of the situation the leading lady was under. The book also seems to have ten beginnings, the story doesn't really start until chapter three. There was some good background info in there to help setup the story but because it was written the way it was, without action or in the moment, it felt dry. We also know who the ghost is before the haunting even begins which I felt hurt the tension and the suspense of the book. Although I did enjoy the chapter written from the ghost's perspective. I think it would've been a better read to have taken that out or put it in later. Perhaps after Syria had figured out the identity of the personage possessing the top hat first, then have him reveal to her his side of their once-encounter when he was living and how he/the hat came to be in her home. This, I think, would've made it more of a mystery and heightened the intensity of the story. Although some really creepy things do happen in this tale, my morbid side wanted the ghost to go a step further and for things to get even crazier than they did. If this is indeed based on a true story then I understand why the author didn't take things down darker paths. Despite this, I still enjoyed the book. A few random notes. This book is slightly erotic. Personally, I don't read traditional romance or erotica novels. There really not my thing, partially because it is rather difficult to write a good sex scene that isn't corny let alone a whole book packed with them! The writer of such books has to keep things fresh, change up the sex scenes, and be careful not to be repetitive in positions/situations or descriptions. I would rate the sex scenes in this book a notch or two below the steaminess of a Sookie Stackhouse novel. They're not super kinky but not mellow either. However, with all the sex acts happening with the ghost and the husband being in the master bedroom they tend to repeat each other. I do give the author credit for trying to change them up though and did enjoy some of her descriptions. Eventually when Syria finally confided in her mother about the situation her mom told her to call a "Ghostbuster" to get rid of the ghost. I thought it was funny when the mom used the term. Syria uses it in her narrative three times afterward even after she had researched paranormal activities on the internet. Paranormal Investigator, Exorcist, or Medium would've been more proper terms and Syria would know this from her googling. It's not a big deal but it seemed odd and took me out of the story. Although she never ended up calling such a person to solve her haunting issues, I did like the solution she and her friend eventually came up with and how the book ended.


Overall I give this book four hats/stars. It's a good, steamy read for any paranormal lover or twisted weirdo like me. I enjoyed this book and the heebbie-jeebbies it gave me. Though it may have ruined me from thrift store shopping and frequenting flea markets for a while. My hat is off to the author for creating this chilling tale.


Now go forth and give this haunted, twisted romance a read, but do so at your own risk! Muwa-ha-ha-haaa! You can find it here.  Till next time.

Posted by Unknown at 7:06 AM No comments: