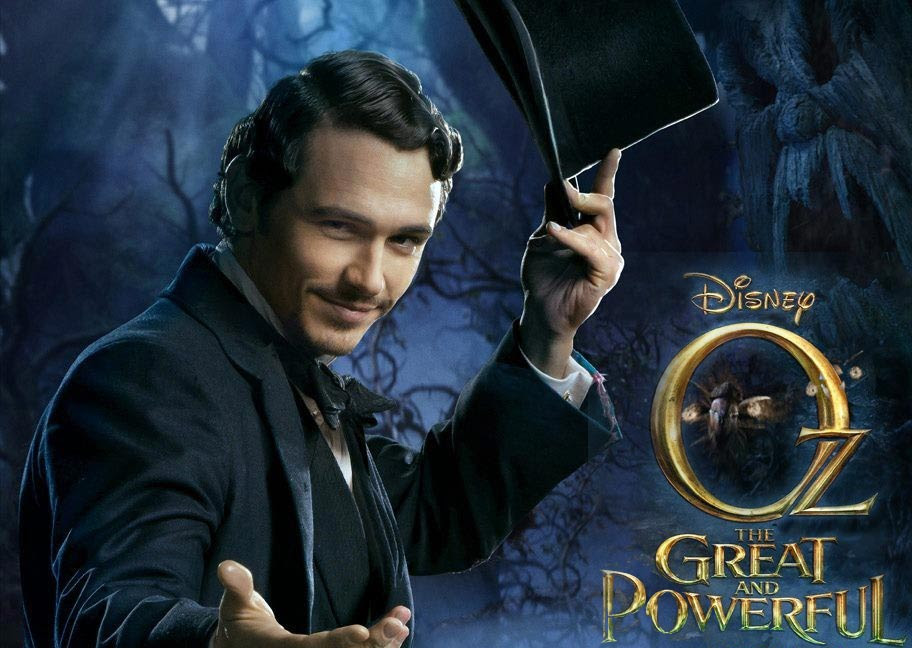 I don't know about you but I enjoy me a good fantasy every now and again. Recently I saw "Oz the Great and Powerful". I was really looking for to this one. I'm a big fan of James Franco, Mila Kunis, and Rachel Weisz. So, with a great cast, stellar effects, and another tale out of the land of Oz, I thought this had to be a great flick! I have to say though it didn't quite live up to my expectations.

The story starts in black and white boring old Kansas at the county fair. We meet the Wizard/con artist Oscar Diggs a.k.a Oz a carnival magician who dreams of bigger things but isn't a very honest fellow. Needless to say his little white lies get him into trouble and he has to flee the carnival in a hot air balloon. Then, suddenly he's caught up in a tornado and when the storm is over he finds himself in a strange new (colorful) land. He happens to meet a very attractive young Witch called Theodora the Good. She informs him that he has landed in Oz and that it's been prophesied that a great Wizard would fall out of the sky and save Oz from the evil Witch. So she assumes he's the Wizard they've been waiting for and takes him to the Emerald City to rule as King. However, on the way, he puts the moves on Theodora and she becomes convinced their in love and she will be his Queen. At the Emerald City he meets Theodora's sister, Evanora another good Witch, of course. Oz decides to pretend to be the Wizard they've been waiting for after seeing the royal treasure. Only problem is he can't be crowned King until he kills the evil Witch. So begins his real adventure. Up to this point I really enjoyed the movie.

I won't tell you to much more of the plot since I don't want to spoil it for those who haven't seen it. I will tell you why it lost me a bit in the second half of the movie. (SPOILER ALERT) At one point one of the "good" Witches is convinced to eat a poison apple that will kill her heart so she will not feel heart break. One of the side effects is that it turns her from a beautiful woman into the the horrible green faced wicked Witch of the West we all know from "The Wizard of Oz". It's not a bad twist to the tale, however, the make up and fake nose are a tad corny. When the newly-turned wicked Witch of the West appears to confront Oz the Wizard the actress's performance was lacking. It's supposed to be a menacing scene but it's rather lame if you ask me. Part of the reason I say this is because of her costume in this scene. She is dressed in a black classic Witch hat and a black low-cut dress (showing lots of cleavage with tattered frayed skirt that shows lots of leg). I felt this was out of place because she decided to turn evil because she hated the Wizard, when the poison apple turned her into a hideous creature, she said she wanted to stay that way instead of fixing it, that she wanted the Wizard to see her that way and know it was his fault. So, if this is the case, I don't think her character would then choose to wear a sexy outfit to go with her new ugliness. It's not a big deal but it took me out of the film a bit. Also, I felt Michelle Williams was a little disappointing as Glinda the good Witch of the North. She looks the part but I felt she was a little stiff. Rachel Weisz was by far the best Witch in the film in my opinion. Even James Franco (the Wizard) delivered a few lines that were  sort of lame. Over all it was a good film but it definitely could have been a little better. So, all in all, I have to give this film a rating of two and a half stars. It's fun, the production quality is great, and if you're a fan of family friendly fantasy's then this movie will appeal to you. You can view the trailer of this flick below.

Now go forth and check it out for yourself. And afterwards drop me a line and let me know what you thought of it.