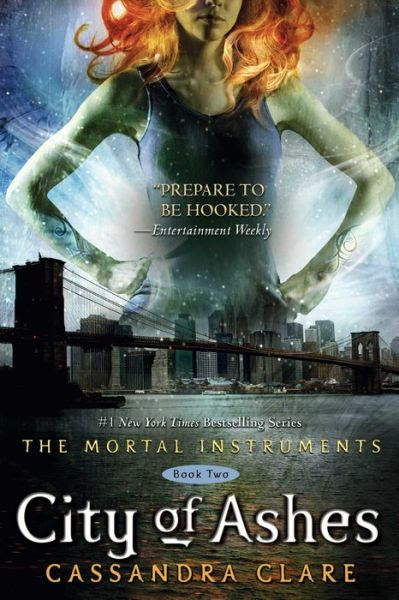 I don't know about you, but I love to read series. However, sequels rarely tend to live up to the first. This is as true in books as it is in film. If you've read my review of book one “City of Bones” then you already know how much I loved it. There were a few things that made me mad though. At first I was so angry with how all the relationships got resolved yet completely torn apart by the end of the book that I seriously considered not reading the next one. However, the author cleverly included a sneak peak of book two at the end of book one. After I read it I knew I had to go out and buy the next book a.s.a.p. So, with some trepidation I started “City of Ash.”

Now, I'm assuming that you've read the first book already because otherwise the rest of this review is going to spoil it for you. So you've been warned. Picking up where we let off, we dive back into Clary's strange new world. Nothing is what she thought it was. Her artist mother (who’s still in a coma) is really a trained demon hunter. Her father is a derange psycho bent on doing whatever it takes to remake the Clave even if it means aligning with demons and possibly destroying the world. Did I mention that her first love, the gorgeous Jace, turns out is really her... BROTHER! Yeah, that’s the part the made me so mad! Of course this makes things awkward between her and Jace. In case you forgot they made out once before they knew they were related. However, this is good news for Simon, Clary's best friend, who’s always been in love with her. At the beginning of book two he finally makes a move on her, and Clary is willing to give it a shot since she can't be with the man she loves. You'll have to read the book to see how that turns out. On top of that Valentine (her crazy dad) is still on the loose, and he has the mortal cup. Now that everyone knows that Jace is really Valentine’s son, no one trusts him. Especially when another Mortal Instrument goes missing and Jace is the only one who knows who has it. If this wasn't stressful enough for Clay, there’s something strange going on with Simon, he's not quite feeling his usual self. You'll see what I mean. Also, Clary and Jace discover that they both have interesting talents they never knew of.

The farther you get into the book the more the tension builds. It's discovered that Valentine is up to no good again. Jace is forced to stand up to his father and decide which side he’s really on. There’s even a Luke and Darth Vader moment between them. I'm happy to say that “City of Ash” is one of those rare sequels that lives up to the first. I thoroughly enjoyed it. Again a few things that didn't quite work for me but all together it’s a great read. I was so tantalized by the ending of the book I was going out of my mind till I bought the third one. Let me tell you that it's a series that’s worth reading all the way through.
I give “City of Ash” a four and a half star rating.

Now go forth and read it yourself. I will be back soon with a review of book three “City of Glass”.